Maggie and Will first met when she was working the front desk at the Norton Commons YMCA.

In between working for his father’s irrigation business and doing his necessary gaming, he was a regular at the gym–not only for the fitness, but to get a chance to talk to Maggie, even if it was just a “hi” & “bye”.

One night after the Zombie Walk, Maggie went to Highlands Tap Room with a group of friends.

Her friends ventured off in search of drinks, leaving Maggie wandering Tap Room by herself.

She turned and bumped into Kane, who was a friend of Will’s that she had also met through the YMCA. He told her that Will was inside and went to retrieve him.

Kane had had a plan to get the two of them together since the moment he saw them interact at the gym. He was the one that had convinced Will to go out that night, but he couldn’t have planned for the stars aligning quite so perfectly.

Even in an overcrowded bar, in the middle of the Highlands, Maggie and Will found each other.

The group hangout lasted well into the hours of the next morning. After that, Maggie & Will began spending every weekend together.

“I had been texting Will and another guy at that point but Will was different. We just connected. He was it–I could just feel it. And eventually I decided to just kiss him and here we are now,” Maggie said when asked about the beginnings of their love story.

She said, “We laugh sometimes at all of the dominos that fell into place in order for that night to have happened.”

The photo shoot began on a tree-lined pathway.

With spring in full swing, the Sawyer Hayes Center nestled in E.P. “Tom” Sawyer State Park in Louisville, Kentucky, was a vision with trees abloom in every direction.

One of Louisville’s top places not only to take engagement photos but with a featured outdoor space, it’s ideal for a romantic wedding ceremony with an indoor space to hold your reception that brings the feel of nature through the threshold.

Since Maggie and Will had a significant height difference, they agreed to participate in a “5 poses, 1 minute” TikTok that helps to show other couples and photographers how to pose couples of varying height.

The Sawyer Hayes Center and E.P. “Tom” Sawyer State Park provided the perfect landscape to fully encompass to love and passion that these two share.

Between the stunning colors and sheer volume of blooms, it’s no surprise that this session began and ended under E.P. “Tom” Sawyer State Park’s picturesque trees. 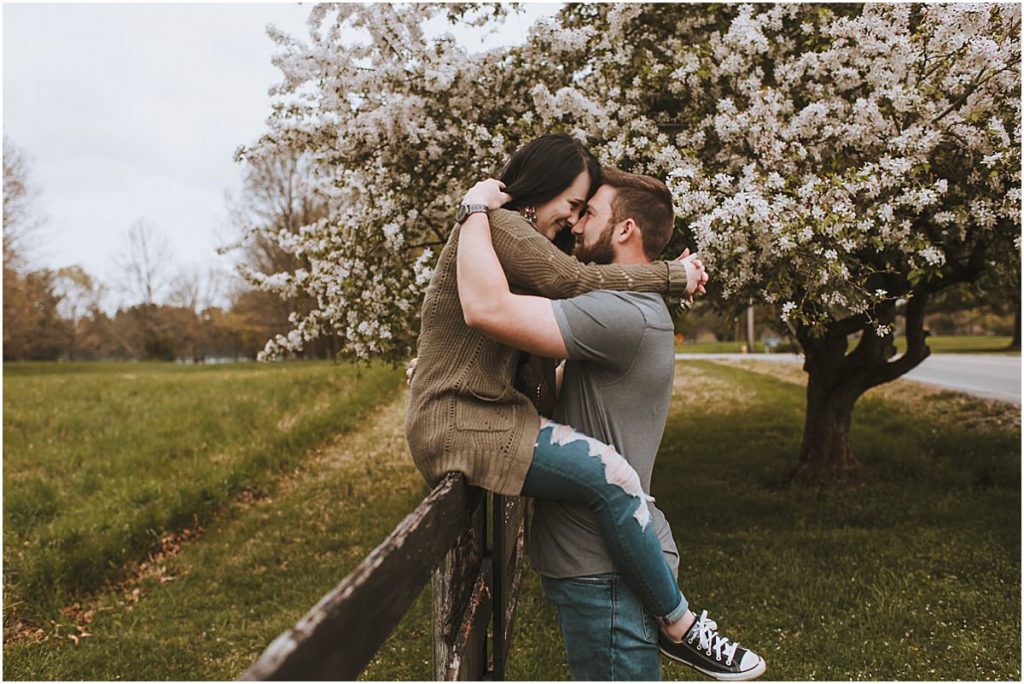 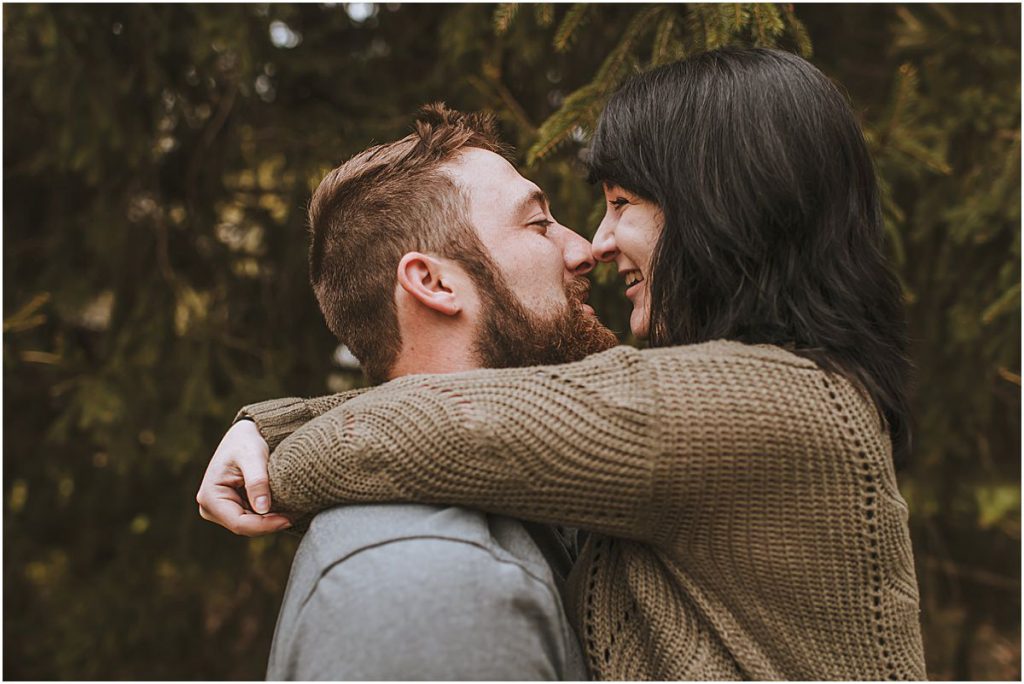 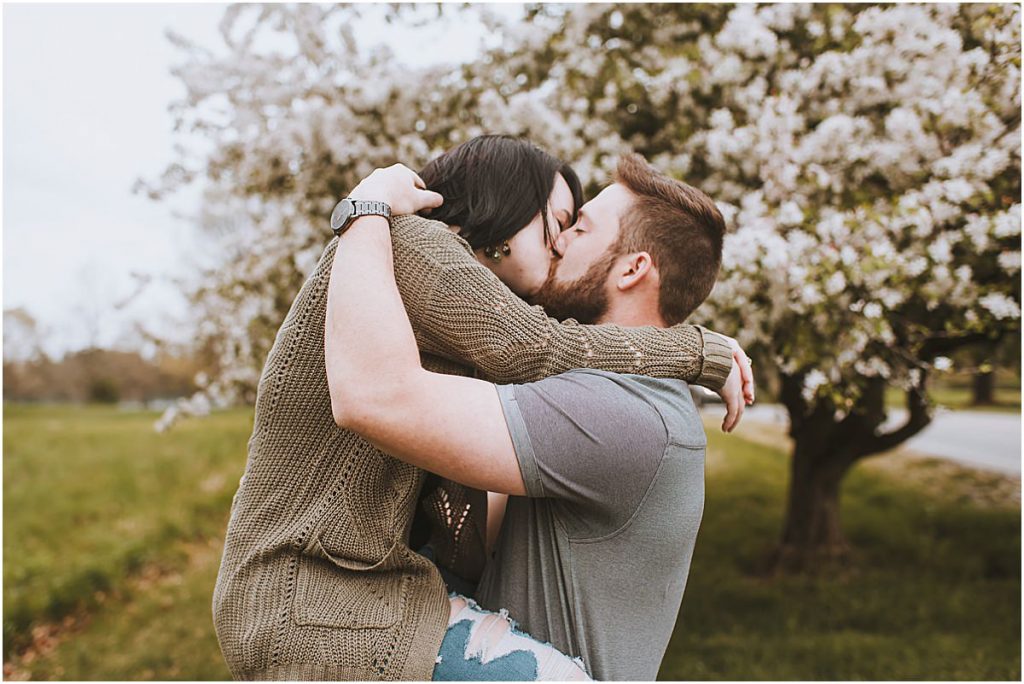 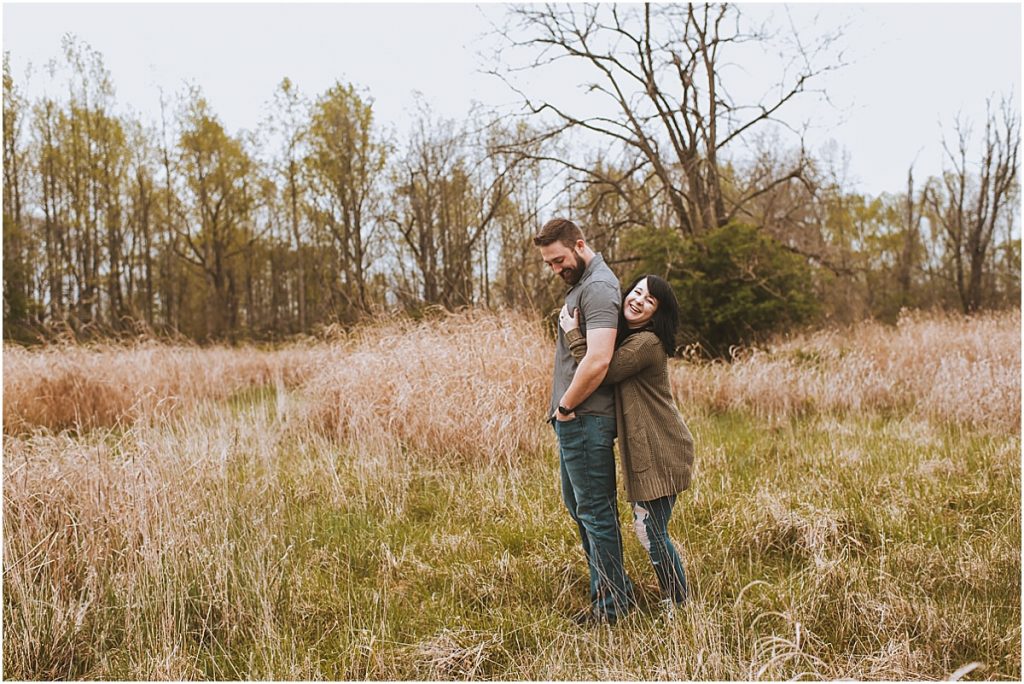 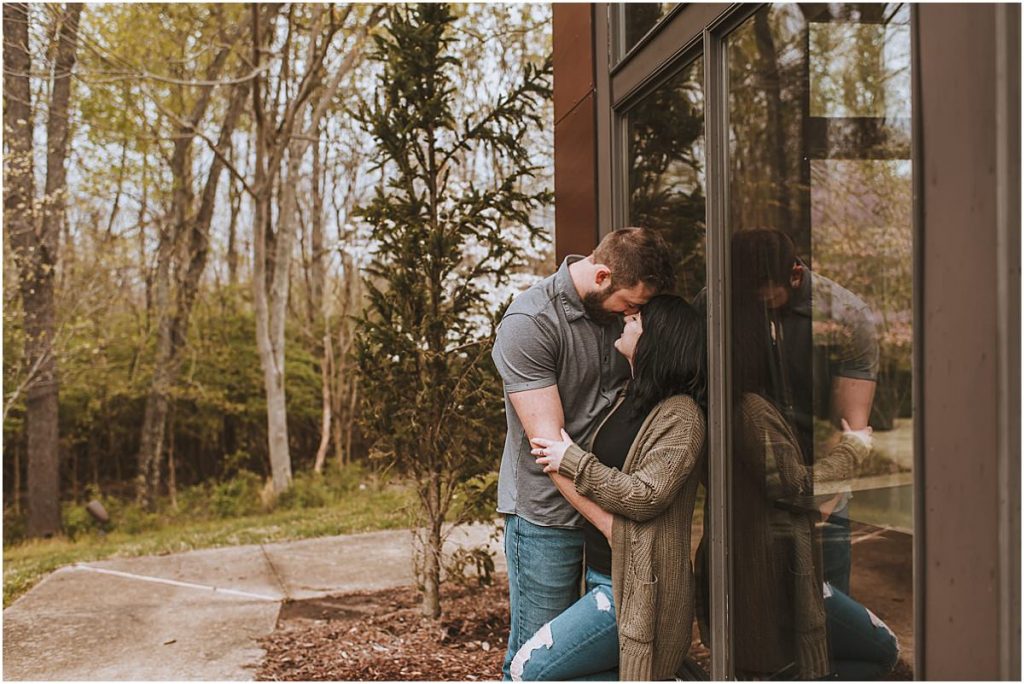 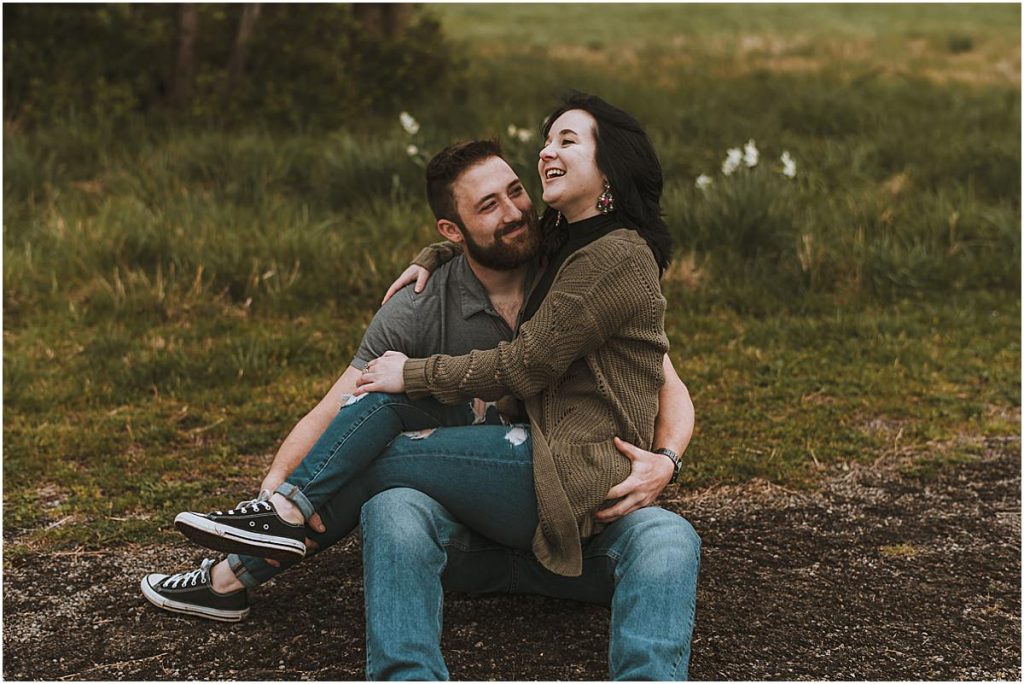 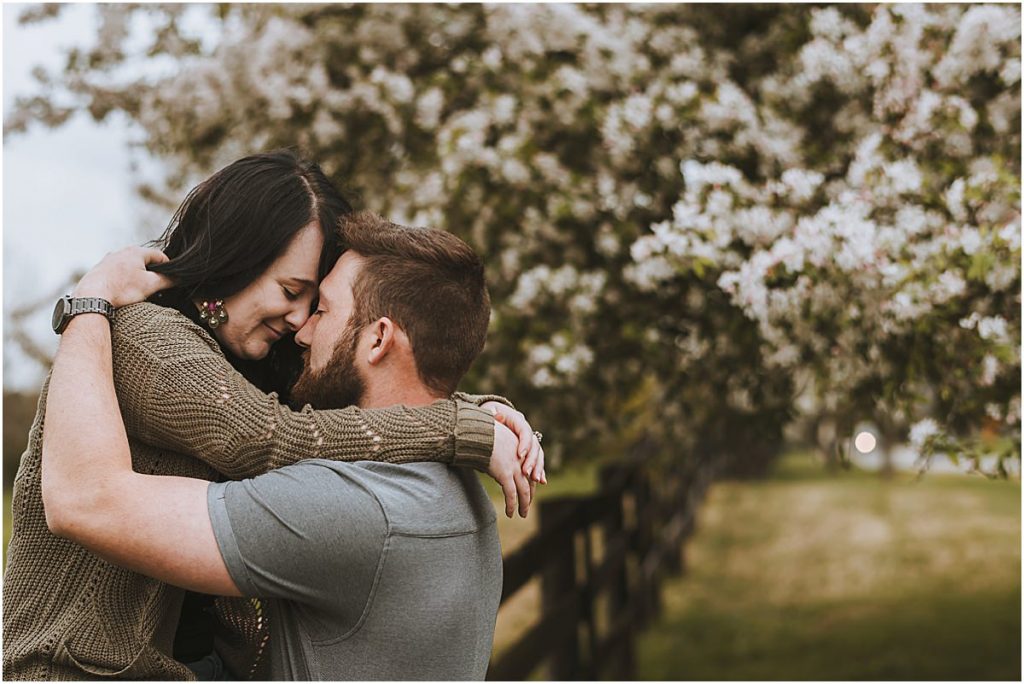 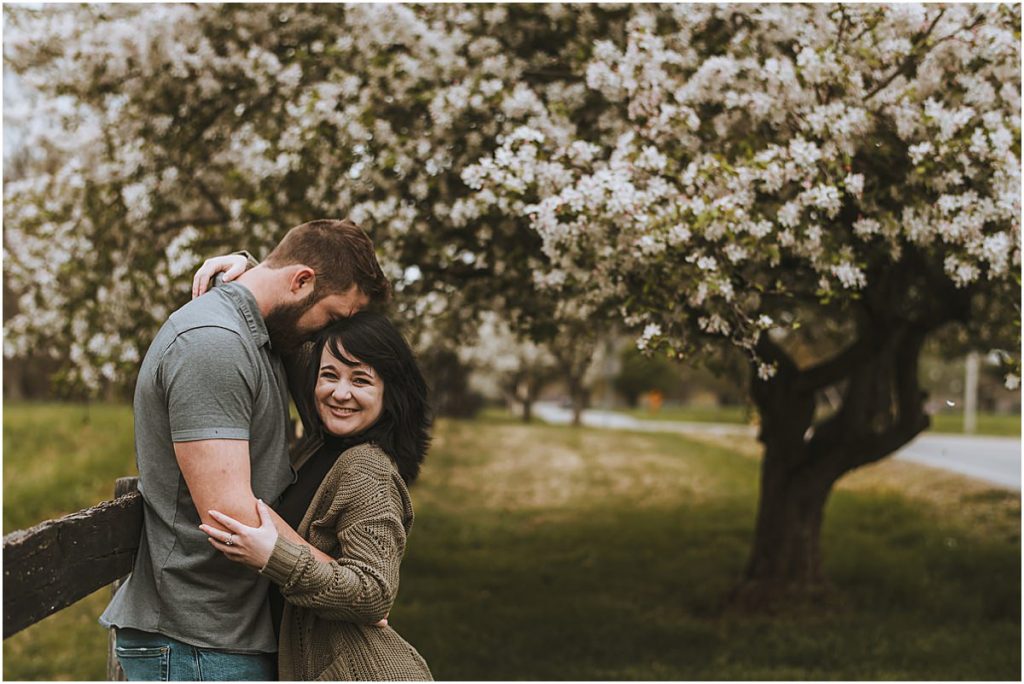